The nasal valve, located in the lower to middle part of the nose, is the narrowest part of the airway. Its primary function is to limit airflow. Since this part of your nasal anatomy is already narrow, any additional narrowing can restrict airflow too much or even cause a blockage. 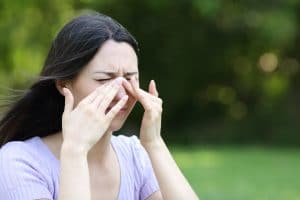 There are two types of nasal valve collapse: internal and external. The type depends on which part of the nasal valve the collapse occurs in.

The internal nasal valve is responsible for most of the nasal resistance. It’s located between the skin and respiratory epithelium, or the lining of the respiratory tract that moistens and protects the airway.

The external nasal valve is made up of the nasal floor, nasal rim and columella, or the piece of skin and cartilage that divides the nostrils.

If you experience nasal valve collapse, you may exhibit the following symptoms:

You should see a doctor right away if you experience these symptoms, especially following trauma to the nose.

If the collapse is mild, it may be treated with a nasal valve dilator. This is a device that manually widens the nasal valve. It may be worn internally or externally, and usually only at night.

Finally, a nasal valve collapse is usually treated with surgery. There are several surgical techniques that may be effective, and your doctor can determine which is best for your situation.